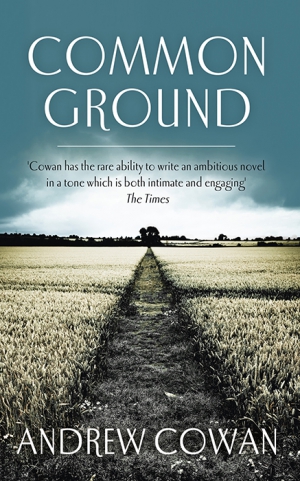 “Ashley is a disillusioned geography teacher.  His partner, Jay, a community artist, is newly pregnant.  In a series of fond, mildly envious communiqués to his brother Douglas, currently travelling the world, Ashley chronicles the astonishing changes taking place in their lives…

“Describing in comic detail Jay’s voyage towards motherhood, her increasing involvement in the anti-motorway campaign being waged on nearby Hogslea Common, the momentous birth of baby Maggie, his own dwindling interest in the lessons he teaches, and the activities of the junkies and gangs who stalk the streets of their decaying neighbourhood, Ashley reveals his ambivalent attitude towards fatherhood, and his devotion to their fragile relationship.”

Common Ground was the recipient of bursaries from the K. Blundell Trust and the Scottish Arts Council.

‘Cowan has the rare ability to write an ambitious novel in a tone which is both intimate and engaging... He creates a fictional world at once bleak and tender, a beautifully exact portrait of a 1990s inner city’   - Helen Dunmore, The Times

‘Cowan achieves a powerful depth of focus... The book is at once grim and optimistic, with a curious sweetness of tone that suggests a writer who actually likes the human race’  - Christopher Hart, The Daily Telegraph

‘... the humour is black, well-timed and thoroughly engaging’  - AL Kennedy, The Scotsman

‘One of the satisfactions of his prose is the unique authority with which he renders the desperation that can be found in the small room, the day’s-end bus ride, the view from a school window. Such moments of quiet meaning are worth pages of melodrama’  - Mark Baechtel, Washington Post

‘Cowan’s gifts of humane shrewdness and downbeat wit are often tellingly on display in Common Ground. Its dialogue leaps into the ear with authenticity’  - Peter Kemp, The Sunday Times

'The description of Jay's labour... is 18 pages long.  Perhaps, for some women, that isn't nearly long enough (a trilogy of novels might just cover some of the pain we go through), but, in a novel written by a man - actually, in any novel at all - it's pretty remarkable.  Like all of Cowan's writing, it's detailed, careful and astonishingly alive.  It's also absolutely nail-biting' - Bethan Roberts, The Guardian

‘A fine and acutely perceived novel’  - Susie Boyt, The Independent

‘Cowan displays a quick ear for colloquial speech, yet his prose is also compelling in passages of understated lyricism’  - Robert Taylor, Boston Globe