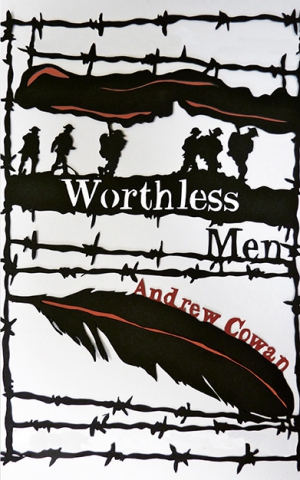 “It is market day in an English provincial city in 1916. The bunting is out and the cattle are being driven in from the countryside. But beneath the surface normality, the war has permeated high and low: the local mansion has become a temporary hospital, the netting factory now produces barbed wire and the women are doing the men's jobs. And on this day Walter Barley returns from the front - a ghostly presence watching as the girl he once loved is lured towards his former captain, the shell-shocked Montague Beckwith.

“Vividly evoking an archetypal place at a turning point in history, this is the haunting story of a casual betrayal and of a boy who proved that those at the bottom of the heap - considered worthless by some - could be the most valiant of all.”

'A wonderful and moving book, wholly original in its treatment of the war's bleak surrealism.  I was completely transported.  It's sensuous and funny and somehow manages never to be moralising'  - Tessa Hadley

'In this, Cowan's first work of historical fiction, period detail is not only meticulously observed but actually moving...  Cowan not only conveys the real texture of life enjoyed, but the worth one human being attaches to another.' - Kate McLoughlin, Times Literary Supplement

'Cowan's novel about the First World War is distinguished by its remarkable close focus on life in Britain and the families back home.  From multiple viewpoints, Cowan - a highly talented but still under-recognised novelist - follows working-class teenager Walter, troubled officer Montague, and the girl who attracts them both, beautiful Gertie, the daughter of their local chemist-cum-vet-cum-abortionist...  Cowan's grim tale is memorable for its time-travelling density of period evocation, re-creating a provincial city (which seems to be Norwich, but could represent any number of British towns in 1916) in all its pig-butchering, lice-picking reality'  - Phil Baker, The Sunday Times

'There have been many novels about the horrors of the first world war; fewer about the uneasy limbo in which people try to maintain their normal lives back home.  But images of slaughter are everywhere - if not in the trenches them along the high street, where young boys earn a few bob in the hooligan art of "cow whacking", driving cattle to market with sticks...  It is commonplace to imply that the foot soldiers of the first world war were treated like cattle:  Cowan suggests that may be more true than we realise, as the bunting and the gala-day atmosphere gives way to reveal some festering and deeply unpalatable truths.  Provincial realism it may be; but to suggest it's nothing special is too modest by half'  - Alfred Hickling, The Guardian

'Worthless Men is written in long, loping sentences that gather into themselves a multitude of detail.  The book is rich with sensory imagery, with the noise and bustle of the city, the stench and stink, the sights and sounds of the farmyard, the abattoir and the battlefield.  Life is described in all its physicality and corporeality...  Although only March and early yet to be thinking of year-end 'best of...' lists, still I would be surprised if Worthless Men did not feature on mine'  - RM Bond-Webster, Eastern Daily Press'

'His voices ring so true they break your heart.  This novel has the feel of an elegiac poem and is an absolute delight to read'  - Sally Hughes, We Love This Book website

'Andrew Cowan's brilliant fifth novel takes a loud subject - the First World War, its casualities and the disastrous effect it has on an English town - and quietens it with details.  A wise artistic decision, or a daring one?  ... The novel repays the necessarily patient reader in full'  - Lesley McDowell, The Herald

'Author of the remarkable and disturbing Pig with a novel of the effects of the First World War on the everyday lives of the inhabitants of a market town.  I'm a big fan... this fine novel ambles back and forth to pre-war and now (1916) as it details the hard life of both periods.  I'm loving it'  - Sarah Broadhurst, The Bookseller

'This is no romanticised history - Cowan never lets us forget the earthy truths of life and his novel is filled with unflinching phrase-making' - Jonathan Barnes, The Literary Review

'Packed with beautiful period details... a haunting, and often moving, record of life in a market town during the Great War' - Bookbag