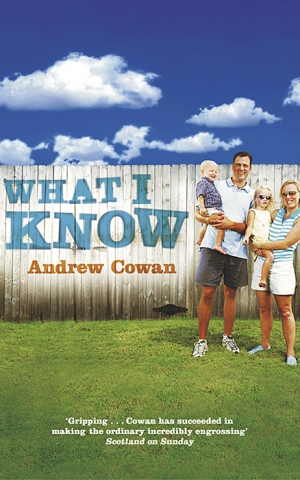 “Mike Hannah is a comfortably married father of two with a decent if mundane job as a private investigator.  Yet the future looks worrying predictable, and he continues to dream about a girl he once loved.  So Mike begins to wonder what might have been, and to explore how the lives of his friends and neighbours compare.  But the further he delves into other people’s secrets, the more suspicious he becomes…”

‘an emotionally and philosophically rich existential private eye novel… In its quiet, lugubrious way, this novel takes a scalpel to the very closest of relationships, showing us how much we hide, and how lost we’d be without the very secrecies we like to pretend don’t exist…. Cowan’s greatest achievement is that he welds this emotional and intellectual acuity to a breezy, intensely readable style…’ – William Sutcliffe, The Guardian

‘Cowan has always written fluently about emotion, rigorously avoiding cliché and sentimentality. What I Know is supremely well crafted: the descriptions are strikingly visual, the milieu wickedly credible…. It is quietly moving, keenly insightful, a story with a provincial English backdrop that is also an understated meditation on the authenticity of existence’ – Joanne Hayden, Sunday Business Post

‘Imbuing the ordinariness of routine with furtive undercurrents of desire, Cowan produces a fascinating study of a man whose private fantasies cost him his peace of mind’ – Anna Scott, The Guardian

‘Cowan has succeeded in making the ordinary incredibly engrossing – something that many try but few do well’ – Zoe Strimpel, Scotland on Sunday

‘a sly, deft and darkly funny look at contemporary suburban marriage, asking whether it is better served by secrecy or openness. It reads like Nick Hornby with a philosophy degree’ – William Sutcliffe, Independent on Sunday Books of the Year

‘a patient, exact and quietly powerful portrait of lives slowly being stripped of their secrets and delusions’ – Trevor Lewis, The Sunday Times

‘What I Know is a novel that… cleverly homes in on our capacity to weave stories around the most seemingly unpromising of raw material’ – Alex Clark, Times Literary Supplement

‘telling the story of a 40-year-old man whose interest in his neighbours spirals out of control… What I Know is a compelling, if at times uncomfortable, read’ – Melissa McClements, The Herald

‘a powerful examination of middle-class suburban angst’ – The Sunday Times

‘Without ever judging, Andrew Cowan depicts the ordinary life of people like us. It is unflinchingly accurate and invigorating’ – Le Monde des Livres

‘This hilarious novel is as much a comedy of manners about a mid-life crisis in the well-to-do suburbs as it is a book about the quest for identity, and the multiple identities that everyone has. Andrew Cowan’s talent is… capable of cranking up the tension and the madness at the centre of his novel without ever allowing the surface prose to lose its smoothness. He has the genius of the ordinary’ – Les Inrocktuptibles